The use of pesticides in the Swedish Forestry sector

The goal of this solution was to find a non-chemical protection against insects that is acceptable economically as well as environmentally by all stakeholders involved in the forestry sector in Sweden.

The target population of this solution consisted of workers in the Swedish Forestry sector, who worked with damaging pesticides (chemicals). These chemicals are generally prophylactic insecticides, like synthetic pyrethroids and neonicotinoids, and were used to prevent insects from eating the bark of young tree seedlings. They have strong effects  on a wide range of insects, and they have a damaging effect on workers’ health. These chemicals are not clearly classified as carcinogens, but they are related to severe adverse health outcomes including running eyes and noses, respiratory problems, skin problems and allergies. Although these pesticides are used worldwide, the problem in Sweden was that most of the work was seasonal, i.e., summer season, and that workers would handle the pre-treated tree seedlings without their protective clothing, because of the high temperatures during summer season.

At the start of the Committee (1998), it was estimated that the annual budget for this project was circa 320 000 euros. The project would run during a period of five years. Most of the funding was raised by arranging for an agreement with all forest nurseries to pay 0.03 eurocent per insecticide-treated seedling. As it took much longer to find a solution to the problem than first anticipated, the contract with the forest nurseries had to be renewed several times. The final contracts were written for the period of 2010-2014. The total costs are estimated at circa 6 million Euros since the start of the project. 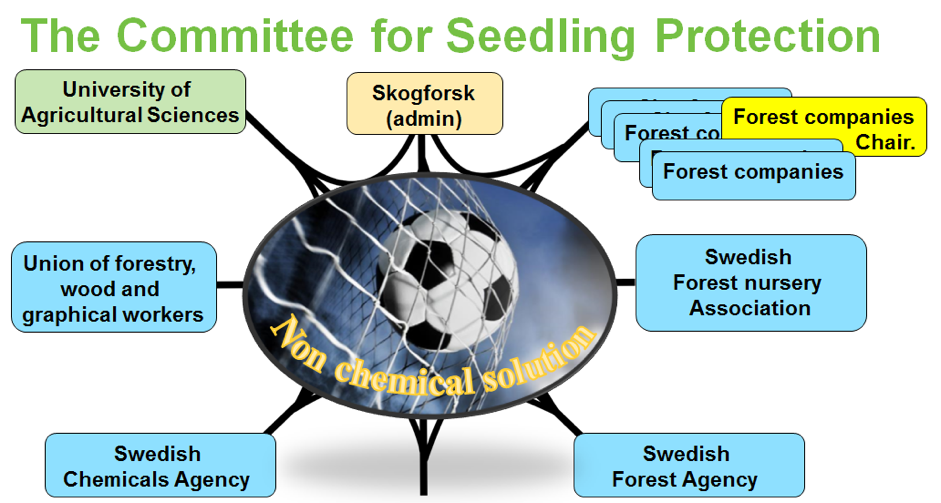 Become a friend of the roadmap and stay up to date on activities, solutions and the news.

Spread the word and invite others to become a friend of the roadmap. Together we can make a difference!